Woke up like a sleepless cat, it was 7.30 a.m. Got up early so that we could sit on the car that went to Singapore Zoo at 10 a.m. sharp. I had prepared what I would wear for this day since I was in Jakarta. After prepared everything that we wanted to bring, lift turned down to get us reached the breakfast place.

10 a.m. our car headed to Singapore Zoo. You can book the ticket via online. You can visit four places in Singapore Zoo which are Singapore Zoo itself, River Safari, Jurong Bird Park, and Night Safari. You can take 1, 2, or 4 trip at a time. Mi familia chose to only go to River Safari. Singapore zoo is just the same like Taman Safari in Indonesia. The difference is Singapore zoo has tundra. Because we were too tired to have a long walk we decided to pick river safari. We also picked amazon forest ride.

Once went inside river safari, we were enchanted by the un-well-known fish they have in the aquarium. There is a very large and black arowana fish. African piranhas that exhibit their sharp teeth and ready to bite anything bother them. Took walk after walk there is this giant crocodile in the aquarium. It was my first time to meet crocodile eye to eye.

Downed the way, we arrived at Giant Panda Forest. I was so excited. There are giant panda and red panda inside. It has two giant pandas. I forget the name. But I could assure you that they had different personalities, the shy one and the active one. The shy panda keeps itself inside the room because of there were so many people wanted to see it. It only goes out when the zookeeper feeds it. The active one was eating grasses when I saw it.

It was so cute and funny. Feels like I want to keep it in my room and make it as my bolsters and my hug-friend. It cheeks looks so stretchy like I want to bite it. It was hard to take a picture of the red panda, but my little sister nailed it. It kept running around the tree’s branch as if it knew that people would take its photo but it didn’t want people to have its photo.

Next destination is the river safari boat ride! There is like a real harbor. The ride is about 15 minutes. The boat will go around the riverside. You will see many animals. But I was disappointed with the ride, because the animals didn’t show up. The animals are some kind of wild and rare animals that only can be found in Singapore. We could only see the giraffes because you know, they have long neck. 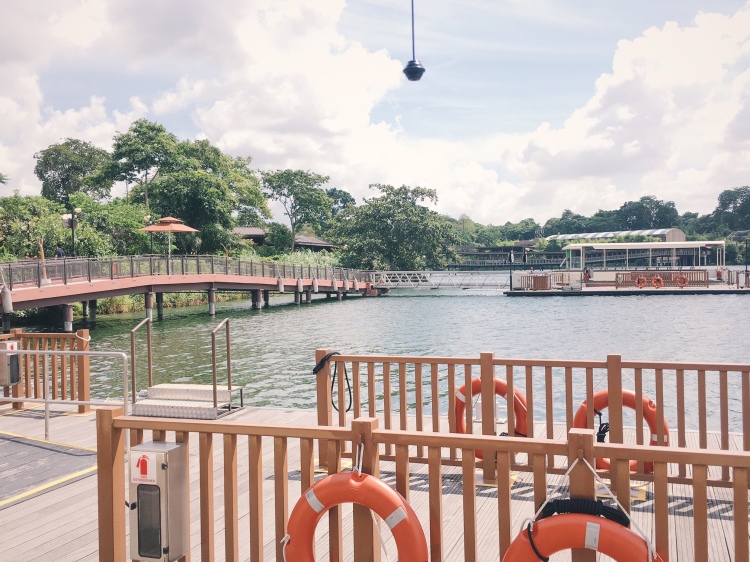 After that we went to the Amazon Ride. We jump into a boat that will go down a handmade river and on the left and right side of the river there are many animals. There are jaguars, flamingos, and so on. But once again it is a lucky play. If the animals are on (not sleep), you can see them. But if you are not lucky, you will just see a dead cage with only the green trees accompany it (no animal).

This art-science exhibition only comes a month in Singapore. So it is like ‘do not miss opportunity’ if you are here and so the exhibition. There were three events, Big Bang Data, Future World : Where Art Meets Science, The Art and Science of Gems. Because we were limited of time, we only chose two, which are the first and second one.

Big Bang Data Exhibition are all about the meaning of data. There are time capsules of where people saved their data from the first time until now, DNA. There is this amazing bunch of ropes on the wall that is hanged with post-it messages that you write. Me and my sister hanged ours too. You will be amazed with the collage of many skype videos from around the world and showed it in a big screen. So creative. And then also there is batch of photo prints from people around the world who uploaded the photo to internet for 24 hours. It was very cool.

Future world. Where Art Meets Science. This exhibition mostly showed about the world of digital. What digital can make to produce art. Moving pictures, a room full of digital flowers,

images of your drawing that can be scanned and go inside a very wide screen,

digital fountain, and the last one, the magnificent of light show. You are walked in an isle full of this always-changing-colors-light. The color alteration make you will say woooowww. Enchanted by its coolness. We spent mostly of our time there to take a good picture. Because we had to wait for others and there were so many people.

That was how I end my #Day3 in Singapore. That was all from my journey in Singapore. See you on the other journey and memorize your journey too everyone 🙂